Getting to Mt White Station is an adventure, especially in a 9-metre school bus. The narrow gravel road is 25 kilometres long and follows the Waimakariri River downstream through the Southern Alps. We had to cross several side streams using wooden bridges and fords. After navigating the technical sections, it was a relief to see the homestead coming into view. We were greeted by the Farm Manager, Derek and the tourism manager, Darren, who were both excited to see what we were going to do with our mountain bikes on the rugged terrain.

We woke to a choir of dogs, chickens, and sheep. The farm animals had obviously never heard of a ‘sleep in’. Wiping the sleep from our eyes revealed an arsenal of vehicles. A Toyota Landcruiser, 4x4 Can-Am and a Honda XR200 motorbike were some of the toys we had access to. We were like kids in a candy shop, exploring new terrain with our new vehicles.

There were too many spots to choose from. Everyone had different ideas of what they wanted to ride. After hours of going in circles we set a time limit and got to work sculpting the landscape into something ridable. The first location was a rolling gully that was perfect for jumps. We grabbed a shovel and pickaxe and started the mahi. After five hours of digging, we were exhausted, but the jumps had taken shape. We knocked off, deciding to come back in the morning to finish building and ride the features. 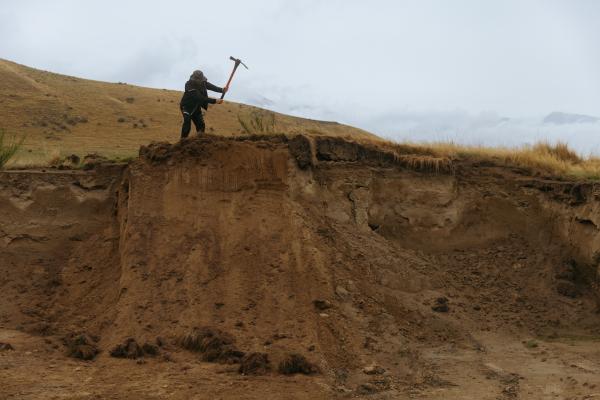 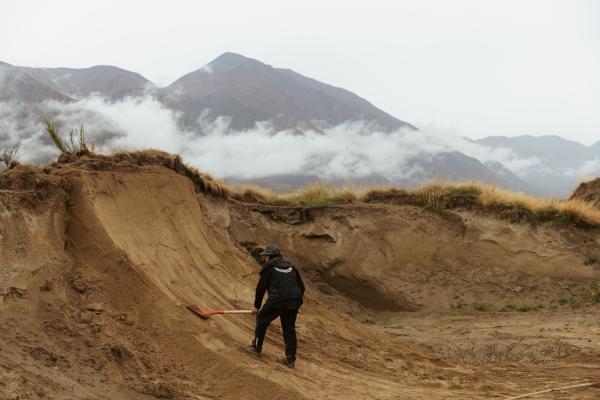 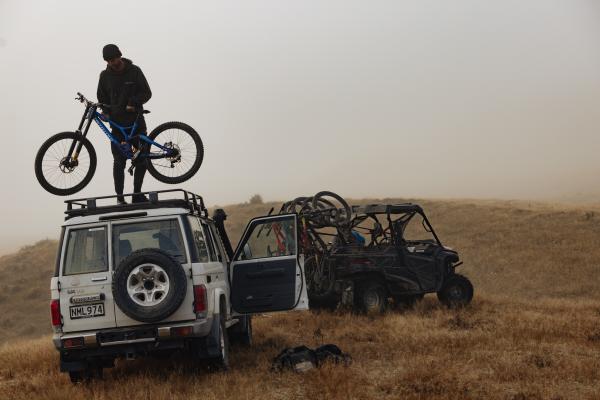 Everyone welcomed us as we arrived at the cookshop for dinner. The farmers were entertained that we were biking in terrain that is more suited to mountain goats. It was a contrast for us city boys who hadn’t experienced the lifestyle of a high-country station. We watched in awe as shepherds on their horses directed hundreds of sheep with a whistle and a handful of dogs. If only mountain bikers could be as easily steered. 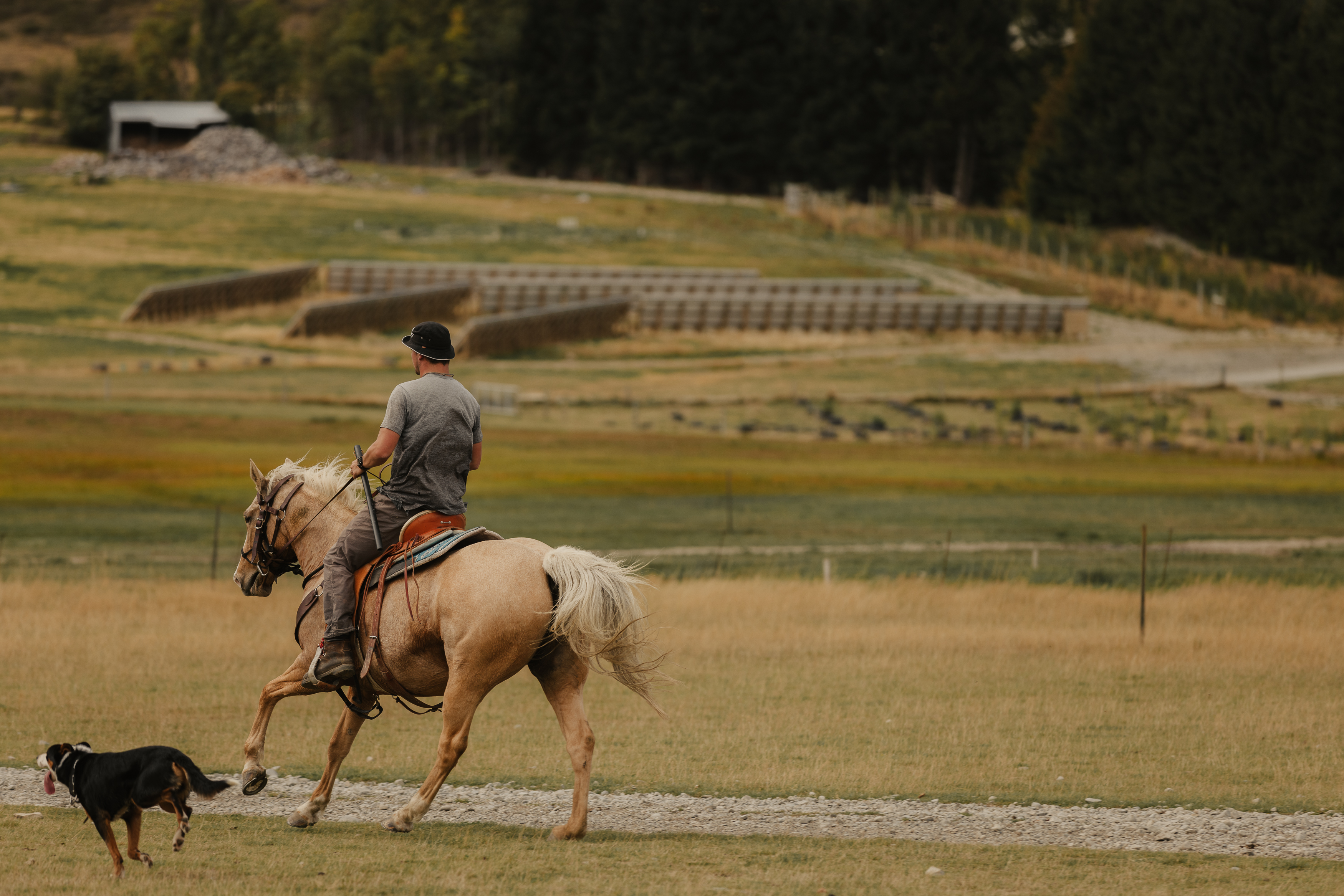 We headed to our jump spot at first light. Mist had rolled in overnight giving it an eerie feel as we drove the 4WD track along the river terraces. We got straight to work and smashed out a few hours digging before the moment of truth, first hits! The jumps worked surprisingly well, the second one floating you into the abyss. As the mist burnt off a spectacular backdrop revealed itself. We spent all morning pushing up the hill and hitting the jumps over and over. Someone finally called lunch, so we parked up on a knoll and demolished the delicious packed lunch Wendy from the farm cookshop had prepared for us.

With full stomachs and refuelled legs, we headed to a gully that had caught our eye. A rainstorm had carved out a dirt halfpipe, with walls about four metres high each side. There was a significant culvert etched in the base of the gully, but the sides were perfect for riding. We cut transitions into the bottom of the gully to make it rideable and then began to surf the dirt.

Elmo was the first to ride the gully, dropping in perfectly.  As he reached the lip on the opposite side a shrub grabbed his bars and he was ejected from his bike. He landed straight on his shoulder in the culvert at the bottom and ‘pop’ his collarbone broke in two. We extracted him from the gully and got him back to the 4x4.

Elmo endured 30 minutes of bouncing along the 4WD track to get to the homestead. Being the man he is, he wasn’t going to let us end the trip on his account. Leaving him with a few Panadol and his feet up, we apprehensively we made our way back to the scene of the crash. We eased back into it before we started to find our flow. It worked better than we expected. It’s hard to describe the feeling of riding a downhill halfpipe on dirt. You have to soak up the intense compressions as you transition from one wall to the other, then manage to switch directions, it’s a unique thrill.

We returned to another masterchef meal at the homestead and sharing a few beers with Elmo we wrapped up another day at the beautiful station.

The final day kicked off at first light. The not-so-secret surprise was the arrival of a helicopter. This was the only feasible way to access the terrain we wanted to ride.

In the air the sheer scale of Mt White Station dawned on us. Mountains stretch endlessly beyond the homestead. 99% of the terrain is too rough to ride but with some knowledge from the pilot and farm manager, Derek, we were directed to some spots where we hoped we wouldn’t instantly write off our bikes and bodies. Simon, the skilful pilot, had us at the top in minutes.

Simon dropped us off and flew back to refuel, leaving us on top of a mountain, days walk from anywhere. We realised then; we were off the beaten track. These hills had never seen bikes before. It was a surreal to rip down a rocky ridge as the helicopter filmed overhead. We ticked off three lines each and then our time was up. It seemed like we had blinked and were landing back in the green paddocks at the homestead. Farm life was continuing at its normal pace, the sheep oblivious of our antics ripping down scree slopes.

We loaded up the bus for the drive back through Selwyn, leaving Mt White Station in the rear vision mirror. As is compulsory, we stopped at the Sheffield Pie Shop. I woke up my sleeping bus companions, and we set about clearing out the afternoon pies. After a pie and drink our spirits were high, reminiscing on the trip of a lifetime.

ENQUIRE HERE
Back to Articles

Murray Brothers Review: Where to stay on a MTB trip in Selwyn

If you're enjoying a trip out mountain biking in Selwyn, Charlie and Craig have reviewed some of the…

Read More About Murray Brothers Review: Where to stay on a MTB trip in Selwyn

The Edge is the original mountain bike trail in the Craigieburn area. Like its name suggests it has …